Menu
DONATE
Back to all

Reflections on the key of F minor

Reflections on the key of F minor
By Warren Cohen, MusicaNova Music Director

While Giovanni Battista Pergolesi lay dying of tuberculosis in 1736, he composed the work that hit the top of the hit parade for that year. Immediately after his death, perhaps fueled by the romantic story of the composer isolated in a monastery and finishing his masterpiece hours before taking his final breath, Pergolesi’s Stabat Mater became immensely popular. Churches all over the Catholic world staged it. Within a few years, it was heard in areas where
Catholicism was not the dominant faith and even outside of church settings.

The reason for the appeal of the work is not hard to find. Pergolesi hit that sweet spot between the familiar and the novel that is essential to appealing to a broad audience.

He uses many of the devices one would expect in a church work. It is an austere setting of the text, with limited and simple writing for the accompanying strings, and just two vocalists. However, Pergolesi’s vocal writing has much more in common with the music one would hear in the Italian operas of the day than the typically dry church music. The lines, although fairly simple, are striking and beautiful, and the interplay of the parts is ingenious and continuously innovative. Pergolesi varied the keys of the movements more than one usually would in church music, where the convention of the time was to remain in the first key or move only briefly away in a few movements. The opening, middle and end of Stabat Mater are in the darkly tragic key of F minor, while the other movements spin through a series of related but mostly minor keys. The overall effect is dynamic.

Most critics of the day regarded the piece highly. Some dissenters, however, complained that it was not “pure” church music. One critic sniffed that the music resembled Pergolesi’s degenerate comic opera La Serva Padrona more than any music that should be heard on sacred grounds.

The popularity of the work, and its inappropriately Italianate beauty, created a dilemma in Northern Germany. Memories of the Thirty Years War were still fresh. The idea of presenting a work that explicitly presented the Virgin Mary in a kind of quasi-deistic light was not something the authorities were comfortable with. After all, one of the
reasons for the schism in the Christian faith was the objection of the reformers to “Mary idolatry.”

But somehow, the piece was being heard all through Protestant Northern Germany. This is where Johann Sebastian Bach enters the picture. The great composer decided to adapt Pergolesi’s masterpiece to the needs of the Protestant areas of the German states. No doubt there would have been a market for such an adaptation. Bach was not alone; several composers tried to adapt the Pergolesi to different ecclesiastical needs.

We have no idea where the Bach adaptation was first presented, or even if was presented during his lifetime. There is no evidence of a commission or request to Bach for this work. It’s possible he had no immediate performance in mind. Bach was an insatiable autodidact, and he may have had his own reasons. Throughout his life Bach frequently copied out the music of other composers to study their styles and as prelude to his attempts to compose in that style. It might have been simply part of his study of Catholic Church music. Shortly after his work on the Pergolesi, Bach expanded previously composed material into the final “Catholic” version of the B minor Mass.

That said, Bach’s adaptation is far more than a copying out of the original. He changed the text from the traditional Stabat Mater (a 13th century hymn that depicts the suffering of the Virgin Mary during the Crucifixion) to the Protestantly appropriate Psalm 51. The accompanying parts are different. In Pergolesi’s setting, the viola largely
doubles the cello part, while in Bach it is wholly independent. The two violin parts are more strongly differentiated.

Within the vocal lines, the changes are much broader than those required to accommodate a different text. Where Pergolesi has a long held note, or repeated notes, Bach introduced some melodic material. On the other hand, he suppressed many of the trills and other ornaments found in the original. He alters many of the dynamics found in Pergolesi’s score, some for textually obvious reasons, others not. He divided one of Pergolesi’s numbers into two numbers, for no musically obvious or necessary reason. He altered the order of the last three numbers. And he added a second Amen to Pergolesi’s, in the key of F major instead of F minor.

These changes are revealing. The musically unnecessary splitting of the fifth movement into two makes for 14 movements, if you consider the Amen a separate movement. Bach used the number 14 as a self-identification; according to the alphanumeric code system known as Gematria, the letters JS Bach add up to 14. (And, curiously, Johann Sebastian Bach adds up to 41). The addition of a second, major key Amen distances the music further from the darker character of Pergolesi’s music and underscores the differences in the two texts.

Presenting the two version side by side underscores the differences in style between the music of Italy and the music of North Germany at the time, and it is also a vivid way to directly hear the difference between identifiably Catholic and Protestant music.

In a way, Bach’s version of Pergolesi is akin to a pop musician doing a cover of another musician’s work. By his Gematric “signing” of the work, Bach was taking possession of it, as if to say this is my version of the most popular work of the 1740s.

Around 1768, Haydn entered one of the most interesting, and certainly the most unusual, phases of his composing career. His music became notably more intense, expressive and complex. It is generally thought he was responding to the movement in literature and theatre that became known as “Sturm und Drang” (storm and stress).

Sturm und Drang began as a literary reaction to the rationalist ideas of the Enlightenment. It emphasized and often glorified emotionalism, subjectivity and irrationality as truly “human” characteristics. In music, composers reacted to the “cool” emotions, clarity and simplicity of the Rococo style by cultivating works of considerable complexity (especially in rhythm), abrupt changes of mood, and free, often improvisatory, forms. A favorite title of the period was “Fantasy” or “Fantasia.”

The leading composer in this style was probably Carl Phillip Emmanuel Bach, although some of the most extreme examples of the style were written by his brother Wilhelm Friedemann Bach. In the late 1760s Haydn studied a number of Emmanuel Bach’s scores, and it led to what he described as a deepening of his musical expression. His music from this period is darker, more intense and more dissonant. It makes frequent use of minor keys, extreme registers of the instruments, and very fast or very slow tempos.

The seriousness of the music is underscored in his Symphony No. 49, La Passione. It uses a formal structure mirroring the archaic “Church Sonata,” a work in four movements in which the first and third are slow and the second and last are fast. All four movements are in the same key, usually a minor one. The general mood is somber.

The “La Passione” Symphony is in F minor, a key that Haydn owned. It was rarely used by other composers of his time; it is not found in a single movement of Mozart’s 600 works. The suggestion to one and all was a work of great seriousness, and the subtitle “La Passione” suggests a connection with the suffering of Jesus at the end of his life.
As it turns out, the title was affixed not by Haydn but by the producers of a concert in the city of Schwerin in 1790. The city had placed a ban on all secular music. Wanting to perform this symphony, the producers decided on a plausible title based on its form, style and general mood. The name stuck.

The ultimate irony is that the deep seriousness of the work may have been intended for precisely the opposite reason. It seems the music was derived from Haydn’s incidental music for a popular comedy called Die Quäker by Nicolas Chamfort. The music was intended as a satirical depiction of the overly earnest Quaker of the title.

Haydn used the “tragic” key of F minor for satirical purposes on several other occasions. For example, he used it in his opera La Canterina to depict the fake sorrowful entreaties of the manipulative title character, to wonderful comic effect. The theme of this symphony’s final movement is a varied form of the melody used in La Canterina!

That a work could plausibly suggest both the suffering of Jesus and the comic earnestness of a bumbling comic character tells us a lot about the flexibility of musical perception, and perhaps something as well of the genius of Haydn. 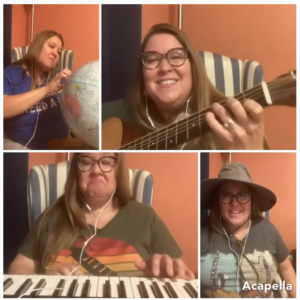 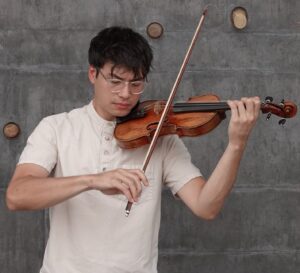 Julian Nguyen will be concertmaster this season.

MusicaNova Orchestra is pleased to announce that Julian Nguyen is

Toss Out the Powdered Wigs and Go Baroque to the Future

Toss Out the Powdered Wigs! MusicaNova Orchestra Performs BAROQUE TO